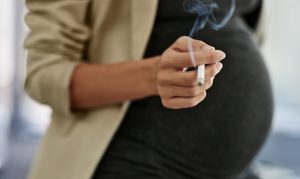 Today it is considered common knowledge that if a mother smokes while pregnant, it will be bad for the baby.

But it wasn’t until the National Child Development Study (NCDS) uncovered the negative effects that doctors began to change their advice to pregnant women.

What we asked your mothers

Smoking during pregnancy and birthweight

Children whose mothers smoked while pregnant were more likely to have a lower birthweight, and were also at greater risk of infant death. In fact, NCDS found that smoking during pregnancy cut babies’ birth weight by an average of 170 grams, and heavy smoking increased the risk of infant death by 28 per cent. The risk went up the more cigarettes a woman smoked. Women who smoked while pregnant also reported a higher rate of spontaneous abortion.

The study also found that if women gave up smoking before the fourth month of pregnancy, their babies had no greater risk of dying than those whose mothers had never smoked.

The researchers believed women from lower socioeconomic backgrounds were at an additional risk. Because babies of working class women were already more likely to be smaller, the effects of smoking during pregnancy on birthweight was even more deadly.

At the time, researchers estimated that 1,500 more babies would survive every year if women gave up smoking.

Smoking and other consequences

The negative consequences of smoking during pregnancy persisted as children grew up. At age 7, children whose mothers had smoked were shorter than their peers, and they were more likely to have wheezing illness after age 16.

Children whose mothers had smoked also did poorer on cognitive assessments when they were young. In fact, their reading age was, on average, four months behind those whose mothers had not smoked. By the time they reached early adulthood, these children were more likely to be overweight and had fewer educational qualifications than their peers.

How this research has made a difference

The findings from NCDS were enough to prompt the Health Education Council to launch a public health campaign in the 1970s to stop pregnant women smoking. The findings also encouraged doctors to change the advice they were giving to their patients. Over time, the number of pregnant women who smoke has dropped from 39 per cent to 12 per cent.

Now We Are 50
This report was published in 2008 in celebration of the 50th birthday of NCDS study members. It covers 50 years of social change in Britain and explains how the study’s many findings have helped to shape decision-making in policy areas such as education, employment, housing and health.

What we’ve learned about genes and common diseases

NCDS has been part of the largest ever investigation into the genetic underpinnings of common medical conditions such as diabetes, rheumatoid arthritis and coronary heart disease.

What we’ve learned about adult learning and skills

Some people reach adulthood with a poor grasp of literacy and numeracy. NCDS has been a key source of evidence on who is most likely to have low basic skills, and the wide ranging benefits of learning as an adult.