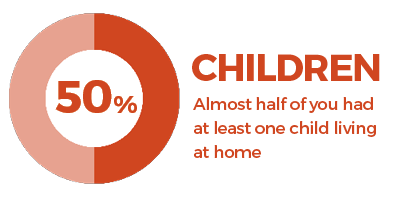 The Age 55 Survey took place between 2013 and 2014. This was the first time we asked you to complete a survey via the internet. More than 9,000 of you took part with two thirds doing so online. The remainder were interviewed by telephone.

The Age 55 Survey asked about who you lived with, relationships, where you lived, family life including caring for parents and grandchildren, work, pensions and expectations relating to retirement, health and leisure activities.

New research from the UCL Institute of Education underlines why people currently in their fifties believe that they may be the most tightly squeezed sandwich generation of modern times.

Purpose of the study

The generation born in 1958 experienced some of the most significant changes to everyday life that Britain has ever seen. The purpose of NCDS is to document the lives of your very special generation, and to learn from your experiences.