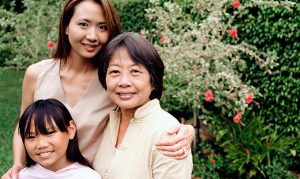 Life has never been particularly easy for middle-aged adults who find themselves caring for aged parents and their own children and grandchildren.

But new research from the Institute of Education (IOE) underlines why people currently in their fifties believe that they may be the most tightly squeezed sandwich generation of modern times.

Major social trends, such as rising life expectancy and the increasing number of grown-up children staying at home, are having a significant impact on the caring and family roles of people in this age group. They may also be affecting their health, wellbeing and employment, the research suggests.

Two thirds of British adults in their mid-fifties currently have some kind of caring responsibility, whether for elderly parents or in-laws, children under 18, or grandchildren, judging by the latest survey of the National Child Development Study, which is following the lives of people born in 1958.

Nearly half of all 55-year-olds now provide regular support for a parent or in-law, the survey found. The most common types of help given to elderly relatives are giving lifts (45% of carers), shopping (38%), decorating, gardening or house repairs (33%), dealing with personal affairs (29%) and cooking or providing meals (21%). Fifteen per cent of people helped their parents with washing, ironing or cleaning and 7 per cent provided help with basic personal needs.

Most help out for only a few hours each week. However, 12 per cent of those providing regular care said they spent 10 or more hours a week looking after their parents or their partner’s parents.

But, of course, many people in their mid-fifties look after younger generations too.

At age 55, almost half (45%) of the 9,100 study members surveyed had at least one child living at home and almost four in ten (38%) had at least one grandchild. Nearly six in ten grandparents (57%) reported that they looked after their grandchildren at least once a month, providing an average of 8 hours’ care a week.

“Caring responsibilities can have a significant impact on people’s lives,” the IOE researchers say. “They can, of course, be fulfilling. But our research shows that spending more than 10 hours a week caring for parents or grandchildren is associated with poorer health and self-rated quality of life.”

Typically, it is women who take on a disproportionate share of the caring responsibilities. Just over one in five (21%) women in the NCDS survey spent more than 10 hours a week caring for others — not including time taken up by looking after children living at home — compared to 14 per cent of men.

But unlike previous sandwich generations, women who are currently in their mid-fifties will soon face a new dilemma because of changes to the state pension age.

Women 10 years older than them found it easier to give up any paid job they had at 60 in order to spend more time as family carers because they could supplement any occupational pension with their state pension.

But as women who are now in their mid-fifties will not be able to draw the state pension until age 66 that option will not be available to them. Many women will therefore have to decide whether to leave paid employment before they are 66 and live on less or continue to juggle paid employment with their family caring responsibilities.

“Future research could look at how men and women in this generation will be affected by the rise in state pension age,” says Professor Alissa Goodman, director of the NCDS. “How will staying in work for longer affect their caring roles and impact upon their health?

“It will also be important to understand how caring responsibilities change as people get older, as many may provide or receive care from their partners in future years.”

Professor Goodman believes, however, that several policy priorities are already clear. “Given the increased pressures on people in their fifties, employers will need to be encouraged to adopt ‘family friendly’ working policies towards older employees,” she says. “This would make it easier for them to maintain working lives while also helping their own parents or grandchildren.

“Strong support for the mental health of people in their fifties is particularly important for those with multiple caring demands.”