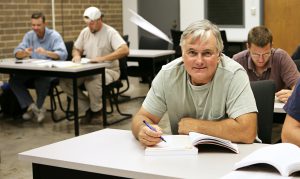 Much of what we learn at school prepares us for life as an adult – particularly basic skills like reading and maths. But some people reach adulthood with a poor grasp of literacy and numeracy. NCDS has been a key source of evidence on who is most likely to have low basic skills, and the wide ranging benefits of learning as an adult.

During your childhood years, we collected measures of your cognitive development, including literacy and numeracy. We’ve continued to measure your cognitive ability all the way to today. When you were 23 we asked you about your basic skills, and at 37 years old we carried out special assessments with some of you to determine your ability in reading and maths. At ages 33 and 42, we asked you a number of questions about any learning you had taken part in as an adult.

When we take all these measures together, we can see how your basic skills have developed over the course of your lives. We can also use this information to determine how literacy and numeracy are related to the other aspects of your lives that we ask about regularly, including employment, health, attitudes and relationships.

NCDS has found that basic literacy and numeracy skills in adulthood are important for many different aspects of our lives.

By age 37, men with a poor grasp of literacy or numeracy had spent more of their working lives unemployed or sick than their more highly-skilled peers. Overall, women of your generation were much less likely than men to go out to work, but those with poor basic skills were the least likely to be employed.

Low-skilled men and women who did work were far more likely to be in labour-intensive, low-skilled jobs, often in the less secure and unregulated parts of the labour market. They also had fewer opportunities for in-work training.

Men and women with the lowest skills reported poorer health and mental wellbeing than their more highly-skilled peers, and they were also less likely to vote.

This research informed the influential Moser report (1999), which made the case for launching Skills for Life, a major government initiative launched in 2001 to tackle the literacy, language and numeracy needs of the UK’s adults. It also informed Skills for Scotland’s strategy, teacher training in Wales, and policies in countries as far away as New Zealand, Australia and Canada.

Researchers have also used the information you’ve given us to uncover the wider benefits of adult learning.

Those of you who took part in some form of learning between the ages of 33 and 42 experienced a wide range of positive changes in other areas of your lives. In terms of your health, adult learners smoked less and took more exercise. They were also more likely to report improvements in their overall health.

Adult learners also appeared to be happier and felt they had more control over their lives with their lives at age 42. Taking part in some form of learning in your 30s and 40s also appeared to have a positive effect on race tolerance, political interest, community participation, and voting behaviour. Courses that led to some form of accreditation had the greatest effect on social and political attitudes, but interestingly it was less formal types of learning that had the broadest range of benefits.

The researchers noted that in all cases, the effects of adult learning on these aspects of life were small. However, as most people change very little between the ages of 33 and 42, even a small change is significant.

What we’ve learned about the returns to education

Learning is a lifelong process. But what do our years of education get us? NCDS is one of the leading sources of information on how the educational path we choose affects our wages, jobs, relationships, and even our health.

What we’ve learned about social mobility

Successive governments have attempted to tackle Britain’s supposed ‘mobility problem’, and NCDS has been the leading source of evidence informing the debate.