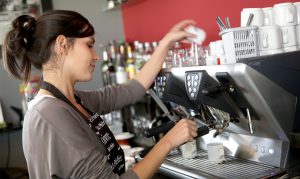 Conditions in people’s work environments – including exposure to cleaning products – are linked to one in six cases of adult asthma, a new study has found.

Exposure to high- and low-risk agents was found to increase the likelihood of developing asthma by 53 per cent and 20 per cent respectively.

Researchers identified 18 occupations linked to adult asthma. At the top of the list were farmers, who were four times more likely to develop asthma than those who were never exposed to any risk agents. Printing workers were three times as likely to develop the condition, and hairdressers twice as likely. Other ‘at risk’ were cleaners, aircraft mechanics, domestic helpers, care workers, and laundry workers.

Four of the 18 occupations were cleaning jobs and three were likely to involve cleaning agents. Lead author Dr Rebecca Ghosh said cleaning products were starting to be recognised as a potential cause of asthma.

“Occupational asthma is widely under-recognised by employers, employees and healthcare professionals. Raising awareness that this is an almost entirely preventable disease would be a major step in reducing its incidence,” Dr Ghosh said.

Coverage of this research

Medical Express: ‘Workplace link to one in six cases of adult asthma among UK baby boomers’