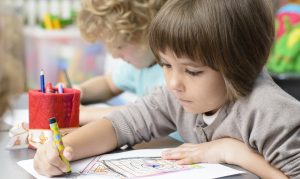 New research published by the Centre for Longitudinal Studies has tested the effectiveness of the latest tool for interpreting what children’s drawings say about their behaviour and emotional state.

Miranda Crusco, from the University of Hertfordshire, used the Draw-A-Person: Screening Procedure for Emotional Disturbance (DAP:SPED) method to analyse the drawings of more than 170 seven-year-olds included in the 1958 National Child Development Study.

She compared drawings by children who had been identified by their parents as having behavioural or emotional problems to drawings by those who had not.

The DAP:SPED is a scoring system that allocates points to different indicators of disturbance in children’s drawings, including the omission of body parts, proportionality and erasing of specific features.

Crusco notes that further research is needed to determine the effectiveness of the DAP:SPED method. In particular, she suggests that using groups of children who have been clinically diagnosed with behavioural and emotional problems may avoid bias arising from parents’ judgements and provide more accurate results.

The significance of children’s drawings has been explored extensively since the late nineteenth century. This study builds on ongoing methodological research into the best ways of using them to identify early emotional and behavioural problems.