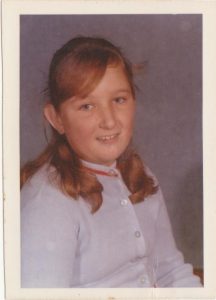 It was a Monday and off to work I work in a hair dressers and looking for a shop when I have saved up some money I will buy one.

I leve home at 9 oclock and start at 9.30.  I work with six other girls all about my age.  Some night we go to the cinema.

when saturday comes I would help mummy in the house and get shopping.  Sundays I would tidy the garden and go out in the after noon.  Some saturdays I would buys some clothes.

Jackie was on track to fulfilling her childhood dreams and had secured a place at training college, close to home in Hertfordshire. But then her family relocated, quite suddenly, to a different part of the country, ultimately leading Jackie to take a different path through life.

“When I was 16 and I’d just finished my GCSEs, my mum and dad were going through a bit of a sticky patch and my dad had got involved in some property developing down on the Brighton coast, and he was away a lot, and I think it was causing them problems. So, he suddenly decided that we would all move down here to Sussex.”

Jackie had no choice but to abandon her place at college.

“Of course that all went by the wayside, and when we moved down here, the college intake for that year had already been taken, so my mum then said, ‘Well you’ll have to get a job, you need to help with the money.’ So she marched me off to an employment agency and they found me a job in a bank and I hated it.”

Jackie did look into getting an apprenticeship with a hairdresser, but her potential earnings, compared to the cost of her travel, made this a financial impossibility.

“Back then in the early ‘70s it was £4 a week, and my bus fares from where I lived into Brighton would have been £3 a week, and the bank were going to offer me £13 a week. From my parents’ point of view, well you’d be daft not to take the bank job.” 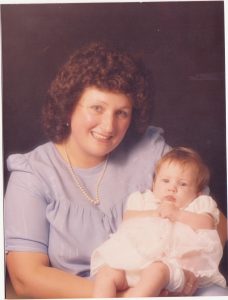 Looking back, Jackie explains that she felt “a little bit cheated” that she didn’t get the chance to pursue her dream job, and felt “trapped” working in the bank.

“I used to dread it. The banks as they were then aren’t like they are now, but they did start introducing selling. You had to start selling things if you were a cashier, and I just thought, I don’t want to do this. But I felt trapped because I didn’t see any way out of it, because I was earning good money, didn’t know what else to do, I hadn’t got any other training in anything because what I wanted to do was hairdressing.”

In spite of this, Jackie stuck with the bank job for many years. She married and only left the bank when she had her first baby, a daughter. She and her husband went on to have two more children – another daughter and a son.

With the days at the bank far behind her, Jackie has remained in Sussex and has had various jobs.

“I worked for theatres, I did the usual party selling type house thing, you know, like Tupperware, and I did work for a makeup company selling makeup and beauty products, and I’ve done Avon. My last job I had was working for a mining company as a recruitment officer, doing all the data processing, and that was really interesting because I’d get to speak to people from around the world. My bank work had sort of helped me to get that job”.

A few years ago, while working for the mining company, Jackie fell ill. She had a big operation to remove a tumour, which prompted her to reassess her life. She decided to stop work.

“After that [the operation], I was sort of really tired all the time, so my husband just said, ‘Look, I know it’s not the time and age but you’ve worked really all your life, why not take a break and look after us and the house a bit more?’ So that’s what I’ve done.”

Although all three of Jackie’s children had previously flown the nest, different circumstances have brought her two youngest back to the family home:

“I always tell them that nothing is in stone and life has a strange way of throwing curve balls, so just go with it.” 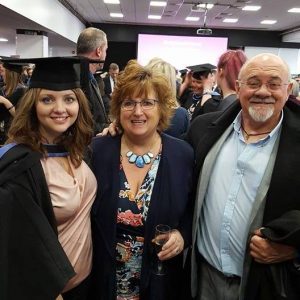 After spending a number of years searching for her true vocation, her middle child, Lucy, recently qualified as a nurse, gaining a first degree with honours. She now works in the NHS, plans to train as a dementia specialist and hopes to be able to save to get her own place one day.

Jackie has one grandson and helps out with childcare.

“I find I’m doing as much now as I ever was. Life’s just taken a different pattern really, you know, it’s all part of my tapestry I think.”

For now Jackie’s husband is still busy with his construction and home improvement business, but Jackie hopes their future will see them have more time to spend travelling together:

Having been part of the National Child Development Study for 60 years, her whole life, Jackie explains what it means to her.

“I feel as though I’m part of a jigsaw puzzle, and in some way it’s a bit of my legacy to society, that what we’re giving is actually going to help everybody. I just think yeah, you know, I’ve been part of that.”