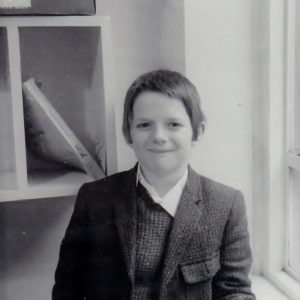 “The alarm clock goes for the start of another day. Another day of work at the office. How boring all I do is sit reading books. I’d better get up. Wednesday eh, Half-day! Roll on 1’o clock. Why coudn’t I be a miner instead of a lawjer (who doesn’t do a thing). Better catch the bus. Don’t forget the book I’m on the climax of the story. Ugh! what a day pouring with rain. Don’t need a brolly though getting wet never did anybody any harm cept pneumonia. Heres the bus. Soon be at work or rather I rest. Heres me stop. Smith Lawyers (I’ve read that sign for 3 years. Out of the rain. Morning, Morning, Morning, thats Good Morning to them 4 more offices before mine Swing doors, Swing doors thats all they ** have in this place except paper. Here we are (at last). The same old desk. Whats happening today? Oh yeh got a 7.30 kick off at [football club] today goodside they are. Lets get down to that book. Chapter 12 “”The Great Day””. Theres goes the phone. Yes. A cient hit and run A. Oh its tommorrow. Yes I’ll be there. This is one day I didn’t exrpect a client. Better put that in my diary. 10o’clock, Town Court, Hit and Run. Lets see where was I. Oh yeh.

There goes the 11 o’clock hooter 15 minutes for a cup of coffee and some biscuits for a 1s. 2 hours left.

At last 1 o’clock, Goodbye work (for today). What shall I do this afternoon. Train, yeh that’ll do. The park would be the best place. Good its stopped Raining.

AFTER DINNER. Here we* are now for some healthy training. I’ll run a couple times round for a start. I suppose I’ll be playing twin centre forward tonight. I’ll stop at 4. Two hours more* yeh fine.
A well 4 it is I’ll be off home. I’ll have a crack at that model soon.

AFTER TEA. 6.30 better be getting along. Hope I have a good game. Out we go, good crowd.

AFTER MATCH. Two more to my total. 4-2. Good win that. Straight to bed tonight.”

At age 11 Paul thought that when he reached age 25 he would be a lawyer. However, in his essay he jokingly mocked the profession, claiming that being a miner would’ve been a more interesting career choice.

Paul’s ‘day-in-the-life’ account of his future self was very creative, perceptive, and as he confesses today, quite pleasing to read after all these years.

“My essay is a little bit cynical for an 11-year-old, isn’t it, but it’s not bad. Suggesting being a miner instead of a lawyer, well, that wouldn’t have been a wise career move. But, I always enjoyed creative writing and English, and I ended up as a journalist.”

Paul grew up on the Isle of Sheppey in Kent, a relatively deprived area, where he says school was a challenge for some of his fellow pupils. He was lucky to fall in with a group of friends who were engaged in their studies, and enjoyed playing football.

“Our school could be a bit like the wild west, it was a big comprehensive. Luckily, we had a fairly bright group, who were still interested in getting some qualifications. I imagine there were some pupils who got chewed up by the whole system.”

After successfully making his way through school, and then passing his A-Levels, Paul went off to do business studies at a polytechnic. Halfway through his degree he realised that he’d made a mistake, but managed to complete his course and graduate.

“After my degree I followed my older brother into journalism. He had quit his A-Levels, and joined the local newspaper as a trainee. Before my degree I never had it in my head that I would become a reporter. I didn’t think I’d go back home, but when a junior reporter’s job came up on the local paper, I joined my brother, and I never looked back.” 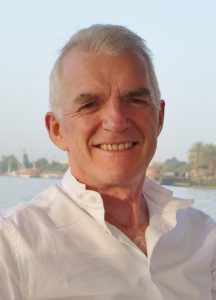 After working at a few local newspapers, Paul spent more than 20 years as a sub-editor at the Daily Telegraph, and now works part-time for the Daily Mail. Although he’s proud of his career in the newspaper industry, he stops short of seeing it as his calling.

“People seem to say, “oh, that must be interesting,” and you still get moments of excitement. But, basically you’re just sat there in an office doing the same stuff, and as I’ve been doing it for years and years, there are not many stories that you haven’t seen before.”

Paul married Amanda in his early twenties, and they raised three boys. One son followed in his father’s footsteps to work for the Daily Telegraph, and another is a trained carpenter. Their youngest son has learning difficulties and lives in a care home nearby. They also now have four grandchildren, who keep them very busy.

Reflecting on his essay, after reading it for the first time in almost 50 years, Paul is surprised that many of the themes he touched upon at 11 have been present throughout his life.

“Reading the essay, I must admit it’s probably not too far from the truth in a way. I’ve always played football, and enjoyed the training. And although I didn’t become a lawyer, I can relate to some of the cynicism that comes across in my essay. I think I was sort of 50 years ahead of myself there ‘cause that’s definitely some of the feeling I’ve got now.”

Although Paul enjoys joking about his sardonic outlook on life, as he approaches 60 he’s looking forward to working less and spending more time with his youngest son, and grandchildren.

“We’re very involved with our youngest son’s care, so I’m hoping to cut back further on my work at the Daily Mail and spend more time with him. And, we’re very hands on grandparents, especially with our middle son’s two children. It’s quite a challenge at our age, but we enjoy it.”