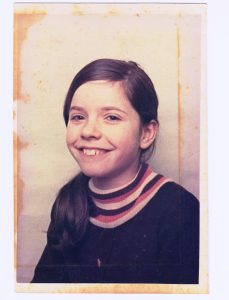 I am sitting in a ward on night duty I will soon be a sister, I think I enjoy the work in hospital, although the work is hard. I am married, my husband is a pratisoiner I have one child but will be leaving hospital soon to have another. We live in London because the hospital is there (Guys hospital) but are hoping to move soon furthor north. We live on the outshirts of London in a mordern semi detached. I enjoy reading and playing with animals we have a cat and dog. My life at home is very leisarly. About the world we now have 2000 people living on the moon some children have lived forever there. We have found the Russians no longer invade other countries England is now like Switerland with no fighting. Today however my husband has gone to give an Idea to the President citizens are allowed to do this we have no King but a man and woman who hear ideas about the country from the colony. We have no more deserts and people live on them they are far more fertile than any other place. Venice is now completaly covered it has been sinking rapidly England is falling in the sea in places and holland has gone under the sea. London is now 2 as big. The whole world is running out of food and even wealthy people only have 2 decent meals a day, nobody is poor but they are going hsort of food. Many animals and distinct, but the world is progressing we now have too much rain scientists are thinking earth has changed position a slight bit. hospitals are now very advaned and the work is easier than it was yeare ago. England has better air a smoke is now different it is clean and white.

When Sally was 11 she wanted to follow in her mother’s footsteps to become a nurse. As a child, she would make her own little hospital ward for her dolls, and care for them every day. Her father was a doctor, but, she never dreamed that women could work in such a profession.

“At that time I was determined to be a nurse. But, I think soon after this somebody said, you might be clever enough to be a doctor.  Up until that point it hadn’t ever crossed my mind that girls could be doctors, and then I was absolutely focused on that.”

In her essay, Sally imagined a future without wars or monarchies, and with a community of people living on the moon. With Venice and parts of England sinking into the sea, she envisaged environmental problems on earth.

“I really liked reading as a child and was always making up imaginary worlds, and telling stories to my brothers. I’ve always been socialist minded, and concerned about the environment. Many of these thoughts probably would’ve been influenced by my father, who was a staunch socialist, and by our family holidays in Europe.”

For much of her childhood, Sally thought she was part of a normal ‘cosy’ family. But around her 11th birthday her mother committed suicide when she discovered that her husband was having an affair with her best friend.

“My mum killed herself three days after my 11th birthday, and one day after my youngest brother’s fifth birthday.  She’d planned it so it was after our birthdays, so she did our parties and all that.  That time was actually very sad for me, and afterwards my life kind of changed.”

Her father remarried, but Sally didn’t get on well with her stepmother. She then spent much of her childhood moving around the north of England as her father took up different GP posts.

Stability came for Sally at age 16, when she secured a place at a Quaker Sixth Form boarding school, and excelled. Then, at age 19 she moved to London to study medicine at Guy’s Hospital, taking her first steps in a medical career that has lasted to this day.

She met her first husband, also a doctor, while at Guy’s, and they had three children together. By the age of 29, they had settled down in the New Forest area, where she became a partner in a GP practice.

“I finished my GP training around the time the three older partners were looking for a new partner. It was kind of finally hitting GP practices that they needed a woman to do the womany stuff. When I started, on call patients would ring up and I’d answer, “it’s Doctor Johnson, I’m the duty doctor,” and, they’d ask, “can I speak to the doctor?,” or, “can I speak to your husband?”.

Although Sally and her husband divorced when their youngest child was only two years old, their relationship remained amicable for their children. Sally later met Nigel, and they have been married for the past 15 years.

As well as working as a GP, Sally has become more involved in health politics over the years. She is strongly passionate about defending the NHS, and inspiring the next generation of doctors, two of whom are her children.

“I started to be aware that a lot of my colleagues were getting fed up, and I thought, I need to do a bit less general practice and develop the stuff that interests me. I just think it’s really sad that a lot of my generation of GPs are so fed up. There’s a real rush to the door, and we’re losing a whole raft of experience.” 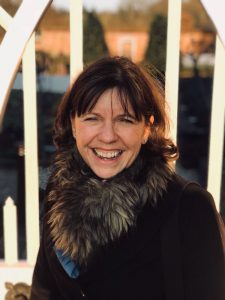 Reflecting on her essay, after reading it for the first time in almost 50 years, Sally is surprised to see how closely her life has followed the one she imagined at age 11.

“I think it’s uncanny, I mean, from age 11 you could probably have extended it pretty well to where I am, I guess. My dad was the first doctor in the family, but I didn’t think I could be one as well, so I decided I wanted to be a nurse. My ex-husband, and two of my children are doctors, so there are lots of us, we’re a medical family.”

Although Sally is looking forward to seeing more of her children, and enjoying more of her hobbies when she reaches 60, she cannot imagine giving up work in the near future.

“I’ve been really lucky working as a doctor, as I’ve enjoyed patient care, and still do. It’s very rewarding because you can make a difference, I suppose.  I’ve loved helping people, I’m enjoying my job, and I feel I still have so much more to give.”