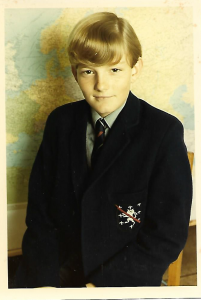 I am 25 years old I have a good job. I do not spend much time at home because I travel a lot abroad. At the moment I have a job as corpral in the army. There is a lot of drill and hard work in it but we do have some pleasure time we go to the pictures and have dances. I don’t mind getting up at 5 o’clock but the best bit I recon about the army is going to bed in the evening. There’s plenty of food to eat. There’s a lot of spit and polish in the army we have to clean our boots till we could use them as a mirror. Buckles have to be polished. This all has to be done by role call at six o’clock. Then we have drill and guard duty for the rest of the morning and combat training in the afternoon. I write letters to my parents and send them by air mail. I’l be going on leave soon then I’l go home to see them all.

When Nigel was age 11 he thought he would be a corporal in the army when he reached 25. He remembers this time of his childhood being full of fun and adventure, a life quite different to the disciplined future he imagined in his essay.

“I obviously had some fixation with the army at the time I guess. I’ve always been a keen reader, so the army career might have been inspired by a book, or could’ve come from one of my dad’s stories about his national service.”

Nigel’s nomadic father played a big part in his childhood and subsequent outlook on life, taking Nigel and his three siblings on various adventures around the country.

“My dad was working class, but if he had ten bob in his pocket he’d take us out on the weekend. He was into various pursuits, so we were often up at five o’clock on a Sunday, out across the Kentish Downs horse riding, or sailing on the coast. He had a friend who moved down to Cornwall because he loved surfing, and we often used to go on holidays down there.”

During his days at grammar school, Nigel won art competitions, and passed his English and Maths ‘O’-Levels a year early. Even with this promise, he still thinks he might not have fulfilled his academic potential.

“I’ve never beaten myself up about how I was, it’s just that I didn’t apply myself, shall we say? I was more interested in the social side of school than the actual study. When I should have been doing homework in the evenings, I was out messing around with my mates.”

After leaving school at 16, Nigel found it difficult to find an occupation that stimulated his mind and satisfied his creative urges. He spent almost two decades working in various roles, before he found a profession he enjoyed.

“I started off working as an insurance broker, but it sucked the life out of me. I was also a car salesman, a bus driver, warehouse manager and a builder. During my time in the building trade, I started doing carpentry, and really enjoyed it. With my eye for detail and artistic bent, it sort of came naturally to me.”

Nigel met his future wife, Caroline, when he was 21, but their relationship didn’t last. Twelve years later, when she was working at the local Jobcentre, they became reacquainted after Caroline called to offer Nigel a job, and a year later they were married.

“We both managed to avoid getting married until we were into our 30s. We never had children, and although we never sat down and decided we didn’t want them, I probably thought that I’d rather have another motorbike, and Caroline would’ve opted for another cat.” 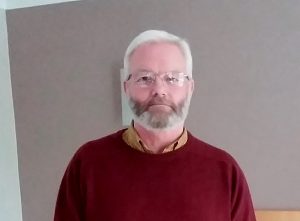 For the past 15 years Nigel has used his building and carpentry skills at a nearby secure psychiatric hospital working in maintenance. And, although he’s always gained a good reputation for high standards in every job he’s had, he’s never seen work as anything more than a means to an end.

“I never really knew what I wanted to do to be honest, and probably still don’t. Although nobody wants to get old, now I’m at the very end of my working life, the advantage is that soon I won’t have to work anymore.”

With his mortgage paid off, Nigel is looking forward to working fewer hours and spending more time pursuing his hobbies.

“I’d be a rich man if it wasn’t for cars and bikes. I’ve had classic cars over the years, and I’ve been an MG owners club member for 35 years now. And, after 44 years of working, I think it’s a good time to get back into my artwork again.”

Reflecting on his essay, after reading it for the first time in almost 50 years, Nigel jokes that he’s quite happy his life didn’t follow the one he imagined at age 11.

“When I was a lot younger I applied to go into the RAF, but they wouldn’t let me in because of an eye defect. I did get a chance to satisfy those military urges when I spent two years in the territorial army from 17 to 19, but that experience certainly put me off the army for the rest of my life.”